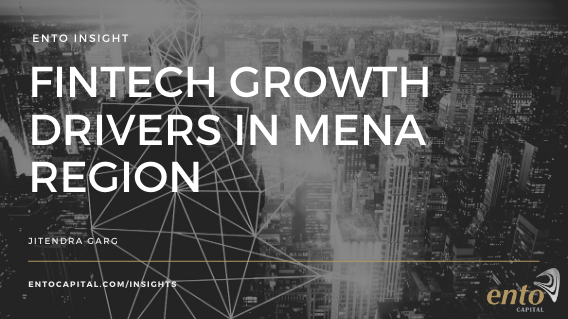 Against this backdrop, FinTech in MENA has seen immense growth in a very short period of time.  A total of US$ 237 million has been invested in 181 deals since 2015 in MENA-based FinTech startups. 2017 was the breakout year for FinTech venture investment across MENA, with large investments including Network International (US$ 30 million), PayTabs US$ 20 million) and Souqalmal US$ 10 million).

In 2018, FinTech overtook more traditionally invested industries, such as e-commerce and transport, and became the most popular by number of deals across MENA. Rapid growth of FinTech industry in MENA Region is driven by several factors predominantly the following ones:

For any startup seeking venture investment, including FinTech startups, a large market size is key to attract funding. The MENA region has key characteristics that make it interesting, with a young, large population, a high GDP per capita, or a combination of the three.

A population size of 195 million in North Africa, providing a large potential market for FinTech startups that are serving emerging markets and under-banked communities. The majority of countries across MENA have an average population that is less than 30 years old. Further, it is supported by US$ 29,000 of Nominal GDP per capita in GCC countries, the highest in MENA, providing higher revenue potential.

The population in many countries across MENA is very tech-savvy, combined with a moderately high internet penetration, which is expected to increase considerably by 2025.

Financial services across the MENA region have been ripe for disruption for a while. Consumers are hungry for FinTech solutions that can help them with their day-to-day needs.

Consumers in the UAE are increasingly adopting FinTech solutions for their day to day needs, with 76% trusting at least 1 tech company as a complimentary solution to their current banking services while 83% of respondents in the UAE open to banking with a technology company, higher than many other countries worldwide according to a recent survey report.